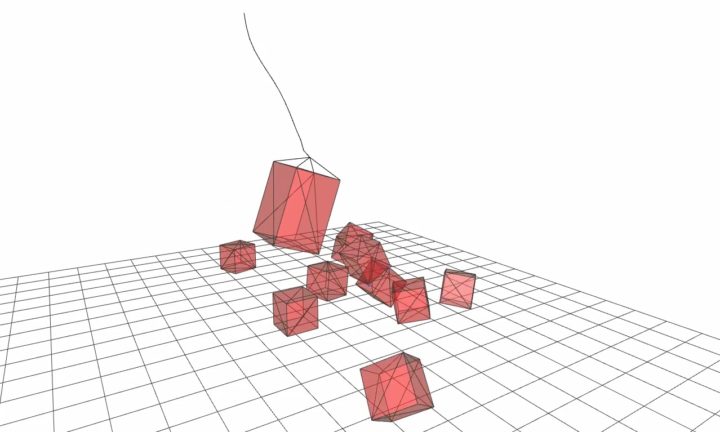 These are some old experiments from a few years ago based on the famous paper “Advanced Character Physics” by Thomas Jakobsen [1] (link). The main idea behind verlet based physics is that everything exists out of particles and constraints between those particles.

For example, a cube exists out of 4 particles, one in every corner. These 4 particles are connected with each other with stick or distance constraints. In the rigid body simulation below each particle has a mass and is influenced by gravity. Gravity induces movement of each particle and this can cause violation of the constraints.

Therefore in each frame the constraints, such as the distance constraints, need to be resolved. This method generates scenes whom are believable such as tubmling cubes etc. The Gilbert-Johnson-Keerthi algorithm is used for collision detection.

With verlet based physics it is also very easy to do soft body physics. The example below demonstrates a jelly cube. The jelly cube exists out of several particles. Each particle has constraints between its neighbours and his original position. Instead of resolving the constraints in 1 frame multiple frames are used to resolve the constraints.